Literature / Pugs of the Frozen North 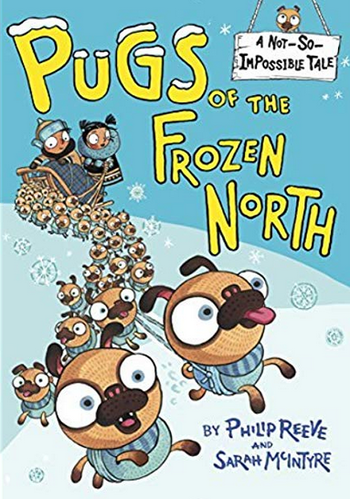 Pugs of the Frozen North is a children's book by Philip Reeve and Sarah McIntyre as part of the "Not So Impossible Tales" book series.
Advertisement:

Shen was a cabin boy on the "North Star", and Sika was a young girl living with her mother and grandfather in the "PO OF ICE". One day, while making a delivery, the North Star is caught in a " True Winter", a winter so strong it freezes the water the ship is on solid. When it finally starts to sink, the captain orders the ship to be abandoned, though Shen saves the cargo of sixty-six pugs. When the crew abandons him, Shen and the pugs begin looking for civilization, which Shen finds in the form of Sika's town and the "PO OF ICE". When Sika learns of Shen's pugs, and discovers that, together, they can pull a sled at amazing speed, she decides to enter herself and Shen into an event being held in Sika's village, The Race To The Top Of The World, where people from all over the world race to the palace of the Snowfather, with the first one there being granted their wish.

Sika wants to enter it because her grandfather raced in it, but sadly, he didn't win. She wants to win so the Snowfather can make him live long enough for another lifetime, and see the next race.

So, now, Shen and Sika are determined to win the race and grant Sika's wish, and they have to get past the other racers, a kraken, a boatload of yetis, and multiple other obstacles to get to the Snowfather's Palace.

Pugs Of The Frozen North contains examples of: