Literature / Oliver and the Seawigs 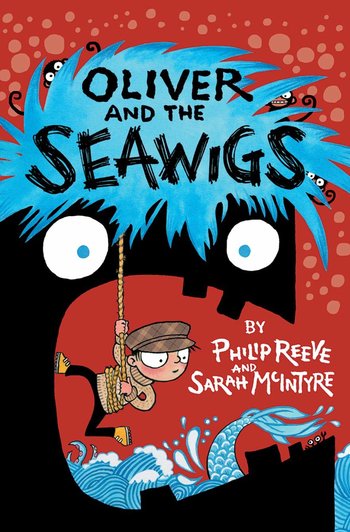 Oliver and the Seawigs is a children's book by Philip Reeve and Sarah McIntyre, as part of their "Not So Impossible Tales" series. It was released on September 5th, 2013.

Oliver Crisp is the son of explorers. All his life, Oliver has gone with his parents wherever their adventurous itch has taken them. But now, Oliver and his parents are ready to have a more permanent residence, which suits Oliver just fine, as he would like a more consistent view in his life. So, Oliver and his parents have moved into a little seaside house, where they soon discover a series of islands that weren't there before. Still having their adventurous itch, Oliver's parents decide to go explore them. However, Oliver simply decides to go check out his new house. When he takes a look outside, however, he finds the islands are gone... and so are his parents.

Immediately, Oliver goes out to look for them. In his quest, he makes the most unusual friends, including a sarcastic albatross names Mr. Culpepper, a near-sighted mermaid named Iris, and a living island with a dream. Apparently, every seven years, all the Rambling Isles hold a contest to see who can make the best seawig, which is apparently a wig made from sea debris. Whoever wins will be the ruler for the next seven years. Reasoning that Oliver's parents will be among them, Oliver and his friends set out to help the Rambling Isle, whom they name Cliff, win the contest. Of course, they also have some unpleasant competition in the form of the Thurlstone, the biggest, nastiest Rambling Isle of them all, and Stacey de Lacey, a teenager who wants to help the Thurlstone win so he can command a whole army of islands.

Oliver and the Seawigs contains examples of: