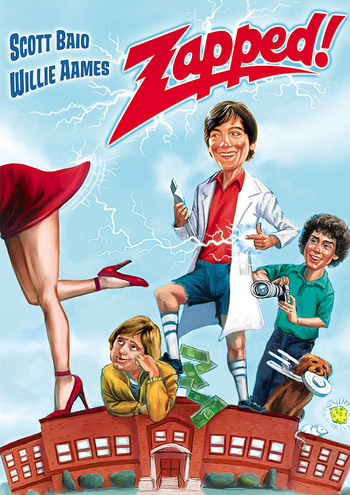 They're getting a little behind in their class work.
Zapped! is a 1982 Teen Sex Comedy film directed by Robert J. Rosenthal and starring Scott Baio.
Advertisement:

Barney Springboro (Baio) is a science nerd who gains telekinetic powers in a freak high school science lab experiment. Barney's new powers are known about only by his best friend Peyton (Willie Aames) and class president Bernadette (Felice Schachter). Over the course of the film, he uses these powers to win baseball games, control roulette wheels, convince his mother he's possessed, and, of course, make women's clothes fly off, particularly those of senior class beauty queen Jane Mitchell (Heather Thomas). Several elements of the plot borrow from Carrie (1976), with some additional spoofing of The Exorcist and even Star Trek: The Original Series.

The film developed somewhat of a cult following, due in no small part to the large amounts of Fanservice it provides, and did well enough in video rentals and cable TV showings for a direct-to-video sequel, Zapped Again, to be released in 1990.

Not to be confused with the 2014 Disney Channel Original Movie Zapped, with British TV fantasy fiction comic parody Zapped, or with the wiki term.