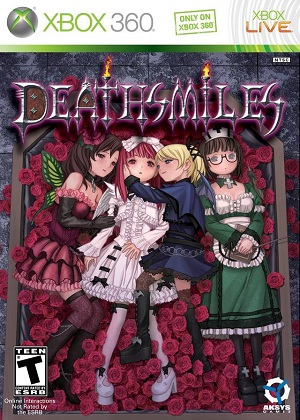 And this is one of the milder pieces of official artwork.note From left to right: Rosa, Windia, Casper, and Follet.
Death smiles at us all. Lolis smile back!
— The North American Tagline for Death Smiles
Advertisement:

Death Smiles is another one of CAVE's bullet hell shoot'em ups, this time with a loli-goth theme. Of note is that this game scrolls horizontally instead of vertically, and that you can select the difficulty per stage rather than per run. This is also the first home console release of a CAVE game to be released outside of Japan by Aksys Games. Character designs, writing, and planning were done by longtime CAVE collaborator "Joker" Junya Inoue. A drama CD series was released in 2010.

An iOS port with a radically-different additional gameplay mode was released on July 7, 2011. A Windows port based on the Xbox 360 version was released on Steam in March 2016.

The second game, Deathsmiles II: Hell's Christmas is the sequel. It received a greatly-expanded port for the Xbox 360 named Deathsmiles II X. Unlike the first game, Cave did not localize the game. Instead, they sold the game for $29.99 Xbox Live's Games On Demand, without localization or even textual translation.

A Compilation Rerelease of both games for PlayStation 4, Xbox One, and Nintendo Switch by City Connection, Deathsmiles I & II, was released on December 15 and 16, 2021 (depending on time zone) for all major regions, except for the North American and European Switch versions which were released on December 30, 2021. This release finally translates Deathsmiles II into English, and features characters from the mobile spin-off Gothic wa Mahou Otome as paid DLC. A PC port is slated to come on June 23, 2022.

Come check out the character sheet!

Tropes smile at us all. Tropers smile back!