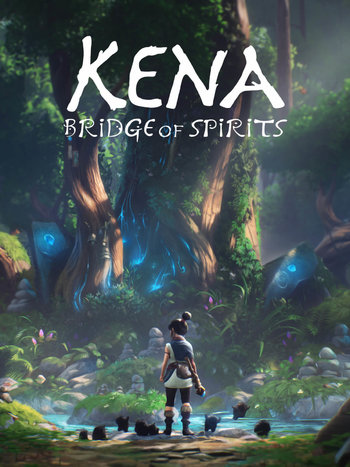 "I know your kind. You sense the power that flows through this land. Yet, you do not fully understand it. Driven by the belief that you can help these troubled spirits. But you cannot hide your weakness from me. You have no power here... Kena."
— Narrator
Advertisement:

Kena: Bridge of Spirits is an Action-Adventure exploration game developed by Ember Labnote Well known for the Majora's Mask - Terrible Fate short film, based off of The Legend of Zelda: Majora's Mask for the PlayStation 4, PlayStation 5, and Windows released on September 21, 2021.

The story centers around Kena, a young Spirit Guide, who travels to an abandoned village in search of a sacred shrine. There, she must uncover the secrets of the forgotten community, now filled with trapped wandering spirits, while also collecting timid little spirits called the Rot to help her in her journey.

The product page on the Epic Games Store can be viewed here.

The trailers can be seen here