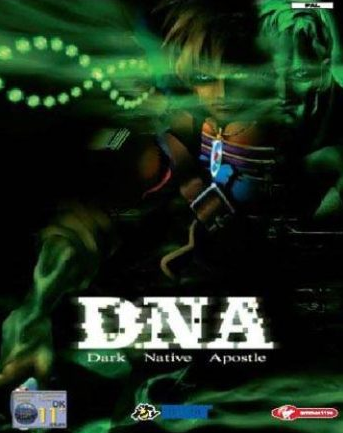 D.N.A.: Dark Native Apostle is an obscure 2002 Action-Adventure video game for the PS2, developed by Tamsoft, published by Hudson Soft and distributed by Virgin Interactive.

In 2063, MegaCorp GENEAR conducts gene experiments, while supposed restricting human cloning. While trying to escape from the North European GENEAR facility with a mysterious stone in his possession, genetic test subject No.13 gets into a fight with one of the facility's higher-ups and gets defeated. Finding himself in a sewer, he realises that he's suffering from Laser-Guided Amnesia and starts a quest to discover who he is while entering the facility. Once there, he meets a lab worker, Sarisa Stingray, who's only there because of her missing sister Alissa, and the two form an alliance.

A unique element in the game is the use of biochips - the player can collect different kinds of chips, such as applying a 'Speed' one to go faster, or 'HP' to get more health. Mix them up to create certain abilities, such as smoke bombs, dashing and climbing. Also, they're able to drop bombs from No.13's right arm.

Tropes that apply to this game include: