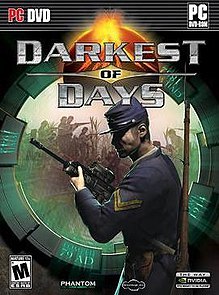 That damned Yankee rifle that can be loaded on Sunday and fired all week...
Advertisement:

In Darkest of Days, Alexander Morris is rescued from Custer's Last Stand by a time traveller and taken 300 years into the future by the time research/police organization KronoTek. The player, as Morris, must go back in time for various Save This Person, Save the World scenarios. Time periods include Ancient Rome, The American Civil War, World War I, and World War II. Usually the player uses period weaponry, but occasionally gets a futuristic BFG.

The game was developed by Phantom EFX and released for PC on September 7th, 2009, with an Xbox 360 port following three days later. Back then, it was most notable for its Marmoset engine, which (supposedly) allowed it to render hundreds of independent AI on screen fighting at one time.

A film adaptation was announced in early 2010

, but nothing has been heard of it since.