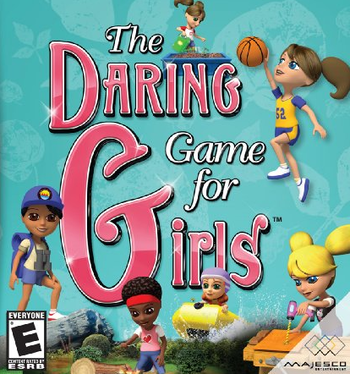 "The Daring Game For Chameleons!"
The Daring Game for Girls is a daring game for daring girls, in which the daring heroine performs various daring tasks, such as making lemonade and selling it to other girls in order to make a profit. It was created by Majesco Entertainment based on the book of the same name, and released on Wii on March 9th, 2009 and on Nintendo DS on March 9th, 2010.
Advertisement:

At the start of the game, each player picks a character and begins to embark on her daring adventures. The main goal is to master several badges, which players can achieve by exploring caves, going on spy missions and playing double dutch. The daring heroine can make friends, too. As opposed to other games where you have to build up a relationship meter, your heroine can merely chuck a friendship bracelet toward another girl for instant bonding.