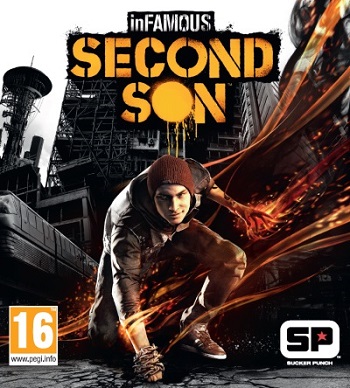 Enjoy your powers.
"Those who would give up essential liberty to purchase a little temporary safety, deserve neither liberty nor safety."
— Benjamin Franklin
Advertisement:

Seven years after the events of inFAMOUS 2, an average-joe delinquent from a Native American Reservation named Delsin Rowe comes into conflict with the United States Department of Unified Protection after discovering he's a Conduit with the ability to absorb the powers of other superhumans. After the leader of the DUP leaves everyone he knows crippled and slowly dying when they refuse to sell him out, he's forced to travel to Seattle with his brother Reggie in order to grow strong enough to break into the DUP's main stronghold so he can copy their leader's powers and use them to save his loved ones.