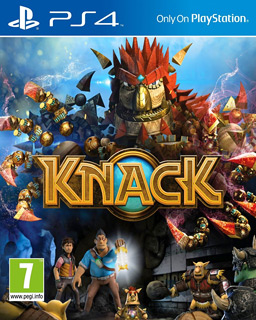 Knack is a platform game developed by SCE Japan Studio exclusively for the PlayStation 4, and is a launch title for the system. Mark Cerny, executive producer of classic PlayStation games like Crash Bandicoot and Spyro the Dragon, serves as director.

It stars a small, mysterious creature named Knack, who was created by a doctor from ancient relics as a way to fight against Gundahar and his goblin army. Knack can bind even more relics that he finds to transform into a much bigger, more powerful creature. Knack can even incorporate different elemental powers such as metal and ice later on, yielding different abilities.

At Playstation Experience 2016, a sequel was announced, and was released on September 5th, 2017.

Not to be confused with the band The Knack. Or the Dilbert episode (though coincidentally, that show was also produced by Sony).