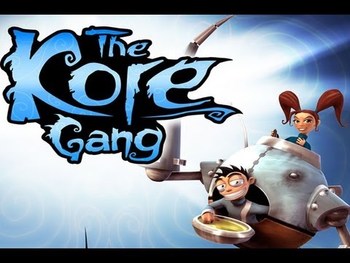 A platformer exclusively for the Nintendo Wii, The Kore Gang had an odd development cycle, beginning on the Xbox before put in Development Hell, Later it was re-formatted into a Wii exclusive.

One day, a girl named Pixie is climbing a skyscraper, an underground tremor unfortunately causes her to fall. She mysteriously survives, and finds a mechanical "Kore" suit, which orients itself around whomever is currently piloting it. She receives a transmission from Dr.Samuelson who created the suit as a backup to take on the Krank Brothers, a trio of villains who intend to invade the surface through a gargantuan drill/fortress called the Krank Tank with their monsters. Pixie agrees to Help Samuelson escape from Dr. Oong, one of the Krank brothers, and ventures into the Krank Tank, along the way she comes across Mad Boy and Rex, his dog, who join her to save Samuelson, find out the Kranks invasion plan and put a stop to them with the aid of WEEBA, a resistance against the Kranks.

The game is a platformer in similar vein to 'Banjo-Kazooie, Epic Mickey'', and so on. It has mixed reception, many critics though, generally note the games creative presentation and charm, but note its repetitive objectives and occasional control difficulties.