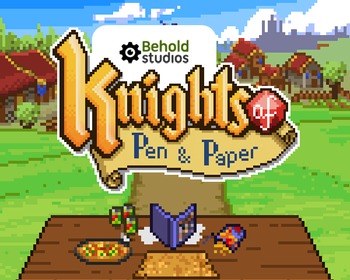 A video game RPG about controlling a group of people playing a tabletop RPG. As silly as that sounds, that's the premise behind Knights of Pen and Paper, an indie RPG, and the first game of both Behold Studios and their Of Pen and Paper series, that takes cues from older turn-based RPGs, and blends them in the most meta way possible.

Controlling both the game master and a group of two to five players, the game follows a fairly stereotypical fantasy game campaign. However, there are a couple of twists. The first is that not only can the characters be customized, but so can the room where the game is played, which provides different statistical effects for the characters. The second is that the player mostly controls what kinds of monsters are fought, and how many, setting the stage for an easy or hard game depending on the player's whim.

The game received a Numbered Sequel, Knights of Pen and Paper 2 developed by Kyy Games and also published by Paradox Interactive, as well as a Sci-Fi Spiritual Successor from its original developer, Galaxy of Pen and Paper.