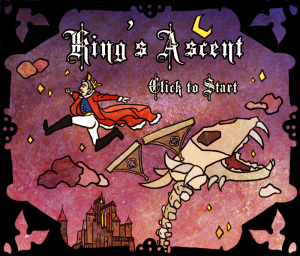 Not so many years ago, a terrible dragon started ravaging the Northern lands. She devoured livestock and would easily fight off all who tried to stop her. In response, the King devised a cunning plan to stop the monster. He held a great banquet in its honor. He showered the dragon with praise and fed it until the beast was stuffed. Once the dragon was sedated by it's own gluttony, the King's knights leapt from their hiding spots and slew the creature. The king then built a great tower to watch over the people and remind them they were safe.
—Level 1 Intro
Advertisement:

King's Ascent is a 2013 flash vertical platformer developed by Aqualuft. Not so many years ago, a tyrant king ruled over the land and lived in luxury while his people starved. A lord who worked for him became tired of his cruelty and overthrew him, becoming the new king in his place. The new king later orchestrated a plot to defeat a great dragon that was terrorizing the kingdom and eating the livestock. The king would throw a feast in the beast's honor, and after it had entered a food coma, the king's guards would kill it. The plan went off without a hitch, and the king had a tower constructed for him to watch over his citizens. He also routed a town's water with the town's permission to stop a drought, and defeated an invading army through tactical trickery. Because of his good deeds, he is beloved by his people.

Today, the king is trying to track down his sorceress, Alabaster, and general, Dravious, who have neglected to show up for a meeting. While he is searching for them, the tower is shattered by the animated skeleton of that same dragon from all those years ago. The king must climb up the levitated ruins of his castle, dropping debris on the beast below. However, he soon learns that the dragon is merely one member of a conspiracy out to overthrow the king... and it quickly becomes clear that not everything is as clear-cut as one would believe.

Gameplay consists of platforming through vertical levels while being chased by an Advancing Boss of Doom. In a unique twist, instead of reaching the end of the level, the goal of each floor is to deal damage to the boss by dropping the falling platforms onto them. The game can be played here

and a postmortem can be found here.

I'll be a farmer.