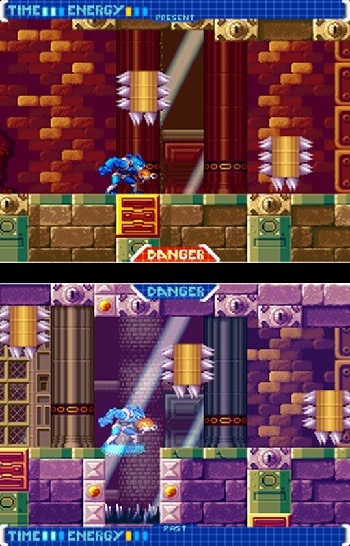 One Hero, Two Worlds.
Chronos Twin is a Science Fiction platformer game, released in 2007 for the Nintendo DS, and later ported to the successor systems.
Advertisement:

The plot itself is your basic "Giant Space Flea from Nowhere has attacked and you are our last hope" mixed with convoluted time travel mechanics (see the time travel tropes below). The gameplay mechanic and feature that is key to this game is the fact that you are playing on both screens. This means that if you're standing on a platform on one screen, you are at that same location in the other screen regardless of what stands below you.