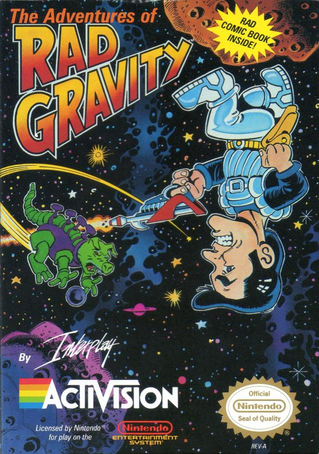 The Adventures of Rad Gravity is a Platform Game released in December of 1990 for the Nintendo Entertainment System. It was developed by Interplay Entertainment and published by Activision.
Advertisement:

The player controls the eponymous space adventurer as he goes through numerous planets on his mission to reactivate the eight missing Compuminds that were shut down and hidden by Agathos. He is guided by the only one left, Kakos, who is his ship's computer during the game. Along the way, he picks up various power-ups and Energy Units that make life easier... usually.

Most people would recognize it for the title screen music.