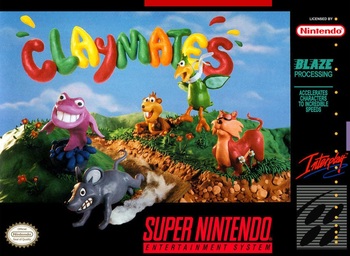 Claymates is a Platformer game for the SNES published by Interplay Entertainment on April 26th, 1994. It is a Spin-Off of the ClayFighter series, known for its usage of Stop Motion animation and Claymation. Recently, it was one of the games chosen to be part of the "Interplay Collection" for the 2020 handheld console Evercade.
Advertisement:

The story of Claymates begins when a scientist creates a formula that transforms clay into living animals. A Witch Doctor desires the formula for himself, capturing the scientist, and transforming the scientist's son Clayton into a blue ball of clay. As Clayton, the player must travel across the world, from his backyard to Japan and beyond, in order to rescue his father and return to normal.