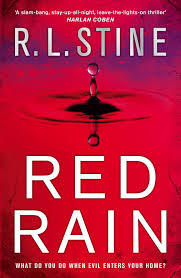 Red Rain is a horror novel released by R. L. Stine in October 2012. In interviews and some marketing promos, the novel is considered to mark the 20th anniversary of Goosebumps, aimed at the series' now grown-up audiences.

Travel writer Lea Sutter finds herself on a small island off the coast of South Carolina, the wrong place at the wrong time. A merciless, unanticipated hurricane cuts a path of destruction through the island and Lea barely escapes with her life.

In the storm’s aftermath, she discovers two orphaned boys—twins. Filled with a desire to do something to help, to make something good of all she witnessed, Lea impulsively decides to adopt them. The boys, Samuel and Daniel, seem amiable and immensely grateful; Lea’s family back on Long Island—husband Mark, a child psychologist, and their two children, Ira and Elena—aren’t quite so pleased. But even they can’t anticipate the twins’ true nature—or predict that, within a few weeks’ time, Mark will wind up implicated in two brutal murders, with the police narrowing in.

The novel includes the following tropes: