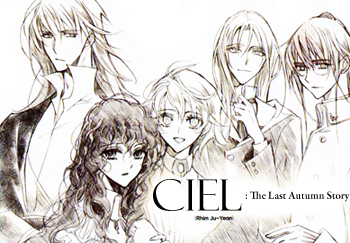 The main cast, from left to right: Krohiten, Lariatte, Yvienne, Daughter, and January
Marie said her dream was to own a piece of land, no matter how small.
Lizzy said her dream was to marry the second son of the mill owner.
But I- I never saw any future for myself at all.
—Yvienne Magnolia
Advertisement:

Yvienne, at 15, has no dreams or ambitions. Even though she's the most beautiful girl in her small village, she envies her friends who all have goals for the future. But she herself can only focus on just getting by from day-to-day, working for the family of aristocrats who lord over the area, and avoiding the affections of their son. Unfortunately, this gets her into trouble with the family, and her only chance at saving herself is enrolling in the magic school she received an invitation to. While there, she'll come to realize that her future would take her higher than she ever imagined.

Ciel~ The Last Autumn Story~ is a beautifully illustrated Manhwa written by Rhim Ju-yeon. Though Yvienne is technically the main character, the series also focuses heavily on three of the friends she makes while attending Lowood: Lariatte Kingdiamond, January Lightsphere, and Daughter. Most of the attention is given to the pairs of Yvienne and Lariatte, and January and Daughter, detailing their adventures at the school and the steady deepening of their friendships (or more). But behind everything, there lurks constant hints that all is not right with the world they live in, nor is all right with Yvienne herself.

There are unmarked spoilers for up to volume 18 below, so read this page with caution. Licensed by Tokyo Pop and, unfortunately, entered their long list of Orphaned Series when they closed shop.