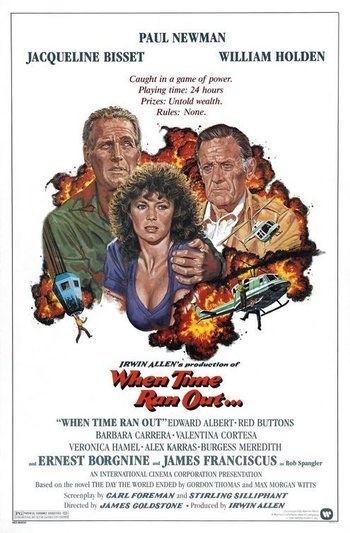 When Time Ran Out... is a 1980 Disaster Movie notable for marking the end of Irwin Allen's theatrical career (though he only produced the film; it was directed by James Goldstone), and arguably marking the end of the golden era for the disaster genre.note Though another movie that came out the same year probably helped with that. The film stars Paul Newman, Jacqueline Bisset, William Holden, Edward Albert, Red Buttons, Barbara Carrera, Valentina Cortese, Veronica Hamel, Alex Karras, Burgess Meredith, Pat Morita, Ernest Borgnine, and James Franciscus as Bob Spangler.

Loosely based on the novel The Day the World Ended, the film can essentially be described as Dante's Peak meets a soap opera, and, in the established Irwin Allen formula, follows a group of famous celebrities as they try to escape a catastrophe of some kind (in this case, an erupting volcano), while working out an incredibly complex web of emotional infidelity, leaving behind those who didn't listen to their warnings of imminent disaster, and having an old person with a special talent that will save the day. Oh yeah, and there's also a guy attempting to win cockfights with his prized rooster.

Despite the considerable talents at work, and a 20 million dollar budget, the movie was an infamous Box Office Bomb, making less then 4 million dollars, and was Allen's least successful film. Among its many problems are a cluttered plot, bad special effects (most of the film's budget was reportedly spent on location shooting in Hawaii), and the infamous bridge sequence, which consists of characters slowly crossing a bridge for almost twenty minutes. The film also suffered setbacks during production, including numerous weather delays, and a cast who didn't really want to be in it (most of them realized the film was going to be a bomb early on). Paul Newman revealed in an interview that this was the one film he regretted doing during his career, and it was also the only one he ever did just for the paycheck.

Despite being a critical and financial disaster, the film did get an Academy Award nomination for best costume design. And on a happier note, it's also believed that Paul Newman's salary went towards starting his highly successful "Newman's Own" food company.

When Time Ran Out... provides examples of: