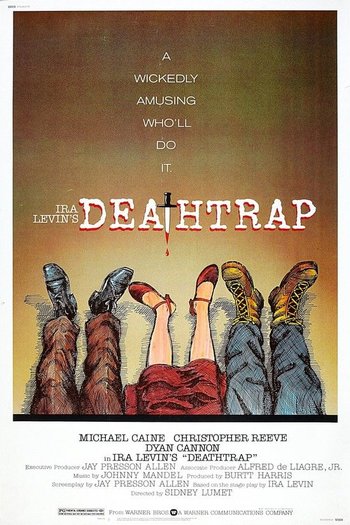 Deathtrap is a 1982 American Black Comedy thriller film directed by Sidney Lumet, starring Michael Caine, Christopher Reeve, and Dyan Cannon. It was adapted from the 1978 play of the same name witten by Ira Levin, author of Rosemary's Baby and The Stepford Wives.

Sidney Bruhl (Caine) is a well-known and formerly very successful Broadway playwright whose career is on the skids after a series of flops. The film starts with Bruhl demoralized after his latest play bombs, with the reassurances of his supportive wife Myra (Cannon) failing to help his mood. Bruhl is further irritated by receiving a script from Clifford Anderson (Reeve), his former student in a writing seminar. The play, called Deathtrap, is excellent, much to Bruhl's disgust. Anderson's script is accompanied by a letter in which Anderson asks to visit in order to get Bruhl's editing advice. Bruhl, desperate to turn his career around, hits on an evil scheme—kill Anderson, and pass the script off as his own.

But all is not as it seems.