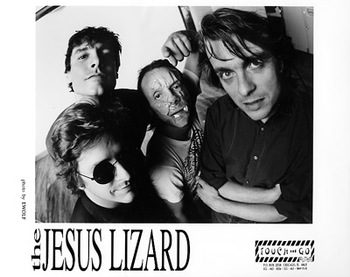 The Jesus Lizard are a Chicago-based Noise Rock band formed in 1987, characterized by David Wm. Sims' and Mac McNeilly's tight rhythm section, Duane Dennison's screechy guitars, and the zany antics of the appropriately named vocalist David Yow. They achieved cult status among the 90's underground rock scene, and at times even flirted with mainstream success, but due to their somewhat challenging and noisy style, they never managed to break through.

Yow and Wm. Sims were previously members of Scratch Acid along with Rey Washam, while Washam and Wm. Sims formed the Rock Trio Rapeman alongside Steve Albini, who also produced every Jesus Lizard album until Down. Wm. Sims also made guest appearances on albums by Industrial Metal Supergroup Pigface and Sparklehorse.

After breaking up in 1999, the band remained popular and respected in the indie rock community, and in 2008 decided to reunite and go on a highly successful tour that ended in 2009. According to the band, this was probably the last time they'd ever play together, soon proven incorrect after 2017, when they reunited for more live shows.