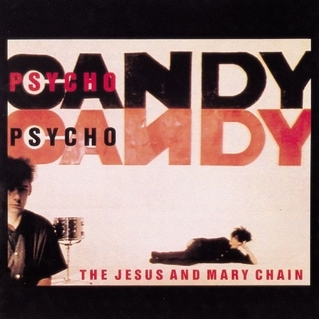 The album art, showing Jim (left) and William Reid (right) on the set of the "Just Like Honey" video
"We already had learned that kind of thing worked. If you could listen to "The Black Angel's Death Song" on the same record as "I'll Be Your Mirror," it worked then. So it's going to work again."
Jim Reid

, discussing Psychocandy's contrast of noise and Pop ("psycho" and "candy") with Under the Radar Magazine, September 2015

Psychocandy is the 1985 debut of Alternative Rock band The Jesus and Mary Chain and the Trope Maker of Noise Pop. The album combines the band's love of Phil Specter-ish "Wall of Sound" Pop with Velvet Underground and Einstürzende Neubauten's head-crushing noise, plus Jim Reid's Trope Codifying Perishing Alt-Rock Voice and a Punk Rock attitude of not giving a damn. The record is considered the band's defining masterpiece

Along with Noise Pop, the album was instrumental in the development of Shoegazing, and it continues to be a pillar of Indie and Alternative music to this day. It was placed at #268 on Rolling Stone: 500 Greatest Albums of All Time.