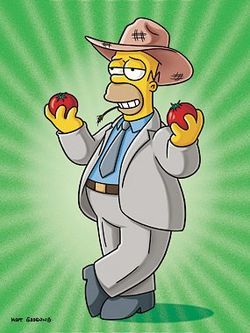 Homer Simpson, tomacco farmer.
Forced to skip town to get out of a duel, Homer moves back to the farmland he lived on as a kid (according to the season six episode "Grandpa vs. Sexual Inadequacy," even though the last part of that episode showed the house burning downnote this continuity error was explained away as either "Maybe the fire didn't burn the house completely" or "This episode was supposed to air before that happened) and tries his hand at growing crops, all of which fail except for a tomato plant with a disgusting surprise inside.