Characters / The Lord of the Rings - Free Men 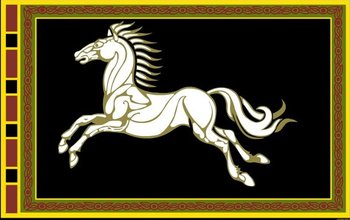 A young and proud kingdom of horse-masters. Founded by Eorl the Young, Rohan is a sparsely populated but fierce kingdom with a long tradition of fighting off invaders. For centuries, they have been steadfast allies of Gondor, but now against Sauron their alliance may be waning and the Riders of Rohan must gather their strength once more to survive the War of the Ring.

King of Rohan, uncle of Éowyn and Éomer. Théoden is betrayed by his servant Gríma who enfeebled and confused him. While Gandalf helped him come to his senses, the damage has already been done: his armies are in disarray, bands of wild men have ransacked the countryside and his only son and heir is dead. Théoden faces the challenge of standing amongst legends in the midst of his failure trying to find his own strength again which he eventually does in the Battle of Pelennor Fields.

Théoden's nephew, and leader of a substantial cavalry unit, Éomer does not approve of the advice Grí­ma has been offering, and the orders Théoden has issued on the basis of it. He is on an unauthorised mission when the three hunters first meets him, and in prison on charges of mutiny and assault when they reach Edoras. As Théoden's nearest male blood relative, the role of heir-apparent devolves onto him.

Éomer's sister, and much beloved of Théoden... as well as Gríma. Éowyn yearns to fight for her country and win honor like her brother and uncle, and falls in love with Aragorn. When both desires are rejected and the victory of Mordor seems inevitable, she becomes a Death Seeker, hoping to fall valiantly in battle before Sauron conquers everything.

A man of Rohan who was seduced by Saruman's promises of power, Wormtongue was King Théoden's adviser. He used clever words and "leechcraft" to wear down the aging king's mind, weakening the kingdom and allowing Saruman's armies to run rampant. 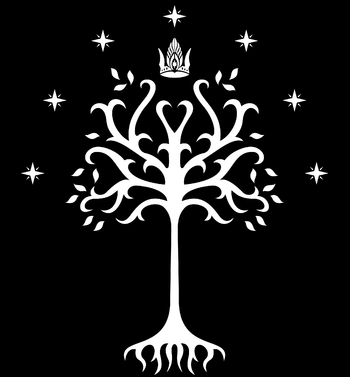 "Gondor! Gondor, between the Mountains and the Sea! West Wind blew there; light upon the Silver Tree"

The first and last line of defense against Mordor and The Remnant of the once-proud kingdom of Númenor, Gondor considers itself the bastion of the Men of the West. With Sauron's power ever increasing, it is them who must face the brunt of his wrath, and ultimately it is in Gondor the fate of Men will be decided.

Boromir's younger brother, but the two are quite different; while Boromir is constantly tempted by the Ring and succumbs to it, Faramir rejects it on principle without even seeing it, and later wards off the temptation quickly when he discovers it's in front of him. (This was changed for dramatic reasons in the films, but even then it's more about securing it for his father Denethor than using it himself.) He becomes even more central in the third novel, as the action moves to his homeland of Gondor.

Denethor is the Steward of Gondor, ruling the nation from Minas Tirith in the absence of the King. He is used to being in charge and does not like the idea of having to give up power to the (possibly) rightful claimant to the throne. Denethor denies Aragorn's kingship on the basis that he is not Anárion's heir, whom the council of Gondorian nobles has always held the be only proper holder of the title 'King of Gondor.' Aragorn does descend from Anárion through Fíriel, daughter of King Ondoher of Gondor, but he is not a direct male-line descendant.

Denethor's brother-in-law and the Prince of Dol Amroth, a fiefdom of Gondor. Imrahil is a noble man with a bit of elven blood who leads the knights of his city to the defense of Minas Tirith. He becomes the acting ruler of Gondor after Denethor's suicide but promptly recognizes Aragorn to be his king. After the War of the Ring, Éomer marries his daughter Lothíriel.

Beregond
A common man of Gondor who serves as a soldier in Minas Tirith. Beregond is appointed Pippin's guide to the city and quickly becomes close friends with the hobbit, as does his son Bergil.

Leader of the Woses (or Drúedain), a primitive tribal population of indigenous people that lived around the lands of Rohan and had a deep contact with the forests and wielders of a very powerful and intrinsic magic. They are very mysterious and elusive, but ultimately good people who refuse to side with Sauron and prove to be invaluable allies.

Halbarad
A Ranger of the North and kinsman of Aragorn. At the urging of Elrond, Halbarad leads the Grey Company, a squad of thirty Rangers (plus Elrond's sons, Elladan and Elrohir) to bring Aragorn the standard Arwen made for him and urges him to enter the Paths of the Dead. Halbarad becomes Aragorn's standard-bearer and follows Aragorn until the Battle of the Pelennor Fields, where he dies, never to see Eriador again.