Film / If You Believe 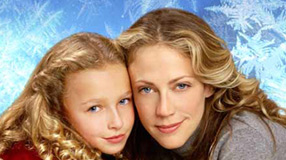 If You Believe is a 1999 Made-for-TV Christmas movie and one of the happier Lifetime Movies of the Week.

Susan Stone is a modern-day Scrooge-like woman. She used to be a spirited child, and an idealistic and enthusiastic young woman, but she is now a weary and cynical book editor who is troubled with self-doubt and has lost passion about everything she loved. She's afraid of losing her job and she has practically given up on happiness.

However, this Christmas, magic comes in the form of a cute 7-year-old girl, invisible to others, who claims she is Susan's inner self. The little Suzie has come to help the adult Susan rediscover her zest for life.

The film stars Ally Walker as Susan Stone and Hayden Panettiere as Suzie. Tom Weller is portrayed by Tom Amandes. It's a holiday Made For TV Movie and a variation of Yet Another Christmas Carol.