Fanfic / Beyond the Dawn 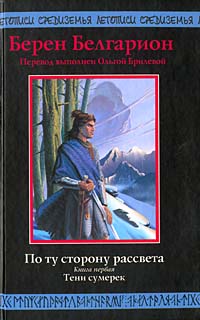 Beyond the Dawn is a fantasy novel written by the Ukrainian writer Olga Chigirinskaya (Brilyova) under the pen name of "Beren Belgarion". This fantasy adventure novel retells the story of Beren and Lúthien as told by J. R. R. Tolkien in The Silmarillion/Beren And Luthien. The book was published in Russian by Exmo Publishing in 2003 (since copyright law was rather lax in the former soviet republics, this book was commercially published on paper rather than staying an online fanfic).

The plot basically follows the Lay of Leithian, but deviates substantially from Tolkien's original version in some points, what with the world being grimmer, and the followers of Morgoth being humans, just like their enemies.

The book uses the poetry of Russian and Western poets and rock bands that is dedicated to Tolkien's characters and plots, such as Blind Guardian (translated into Russian by Chigirinskaya herself).

Compare with A Boy, a Girl and a Dog: The Leithian Script, another long fanfic about the Lay of Leithian.

Beyond the Dawn provides examples of:

Alternative Title(s): Beyond The Dawn