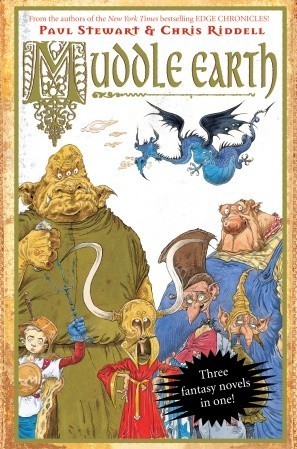 Muddle Earth is a book by Paul Stewart.
Advertisement:

An ordinary Earth boy, Joe Jefferson, is suddenly transported into Muddle Earth by Randalf the Wise. Summoned for the sole purpose of being a warrior hero, Joe must face formidable opponents such as sheep-squeezing ogres and treasure-hoarding dragons. He soon finds that the only way to get to the home he once loved is to defeat the evil Mr Cuddles, who has stolen all of the spell books.

Not to be confused with the SF novel Muddle Earth by John Brunner.

Was followed by a sequel titled Muddle Earth Too, which extends the parody beyond Tolkien. Joe returns to Muddle Earth through a wardrobe, enrols in Randalf's new magic school and discovers his sister now has a crush on a vampire called Edward.

Part of the first book was read on Jackanory, and led to an Animated Adaptation on CBBC. There was also briefly an MMORPG called Muddle Earth World.