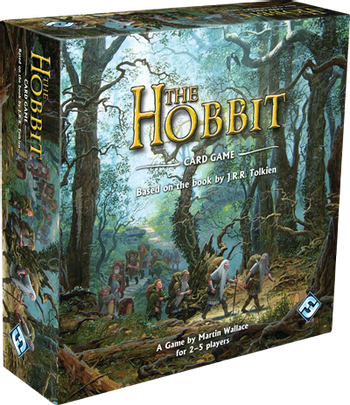 Relive the epic struggle of good versus evil in Middle-earth with The Hobbit Card Game, Martin Wallace’s fast-paced, standalone, trick-taking card game for two to five players. Win hands and use the cards you’ve won to deal damage to opponents, or heal allies and help them with extra cards. Each character assigns cards differently, so use your skills wisely! Fight the forces of evil as Gandalf, Thorin, or Bilbo, or smash the hopes of the heroes as Smaug or Bolg, the goblin leader.

The Hobbit Card Game is a trick-based card game published by Fantasy Flight Games. In the game, two to five players take on the roles of Thorin, Bilbo, Gandalf, Smaug, and Bolg. The players divide into two teams: good and evil. The objective is, in essence, for one side to eliminate the other.

In a hole in the ground lived the following tropes.