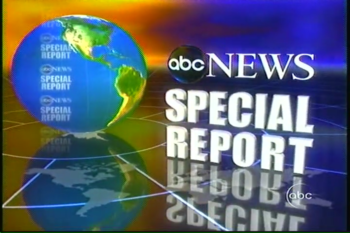 "This is an ABC News Special Report..."
Advertisement:

On occasion, the broadcasts of television programs will be interrupted. Mainly this is some sort of Emergency Broadcast, but more often than not, it's a piece of breaking news that is being reported. The channel will usually cut into whatever show is playing with coverage by their news arm of whatever event is happening. Another variation on this trope is running a news banner during the program announcing a piece of breaking news without interrupting the actual show, a common sight on Japanese networks.

This trope is frequently used by major broadcast networks, and is rarely, if ever, done by non-news cable networks.

Compare to Commercial Pop-Up, when a channel uses a pop-up to advertise a show. When a news program is interrupted for breaking news, that's This Just In!.