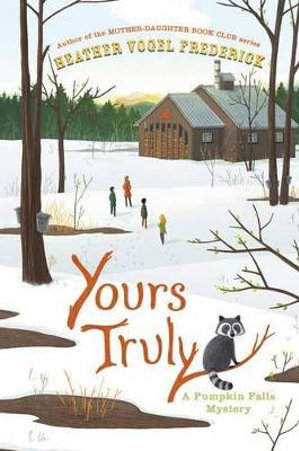 Yours Truly is a Middle School Mystery Novel by Heather Vogel Frederick, and the second book in the "Pumpkin Falls Mystery" series after Absolutely Truly.

Truly Lovejoy has spend a few months in Pumpkin Falls, and the town's starting to grow on her. Plus, her birthday is coming up. She's looking forward to a birthday with a breakfast of sourdough waffles with butter and syrup, a whole bunch of presents, and the presence of her BFF cousin, Mackenzie, who will be spending the week with her. What she gets instead is the announcement that she would be spending the day helping her family with their volunteer work at the Freeman Farm, and her birthday celebrations delayed until the next day. She is bummed right away.

Some time later, though, the Freemans notice that their sap harvest isn't quite as bountiful as it usually is. Worse, the Freeman's neighbours, the Maynards, are experiencing similar problems, and are accusing the Freeman's of sabotage. So, Truly decides to reassemble the "Pumpkin Falls Private Eyes" to look into this matter before it can lead to something disastrous.

Meanwhile, while Truly and Mackenzie are hanging out in Truly's room, they discover a secret compartment in Truly's closet under a loose floorboard. Inside, they find an ancient diary belonging to the original Truly Lovejoy.

Yours Truly contains examples of: