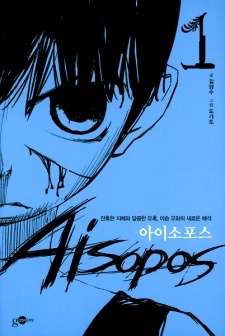 It tells the Coming of Age Story of the titular protagonist. It ran from July 2014 and it ended on March 2017 with a total of 130 chapters.

The story begins before the main character was even born. Master Yadmon, the tyrant of Samos, falls in love with Elli, a beautiful peasant girl. However, she is in love with a humpty dumpty named Frontis.

Her marriage with Master Yadmon forces these two lovers to be separated. This causes Elli to become gloomy and refuses to smile. Yadmon, not standing to see his beloved wife like this, hires Frontis to cheer her up.

Frontis' mere presence makes the young woman feel better and thus, he comes to visit them everyday, much to Yadmon's desires. One day, the two lovers manage to escape and settle down to Athens, where they have a boy, named Aesop.

Yadmon spends 10 whole years looking for them. Upon finding them, he accidentally kills the parents and takes the orphan child as a slave. And that's only the beginning…

open/close all folders
A-L
M-Y
"I remember a story Aesop told me a long time ago."