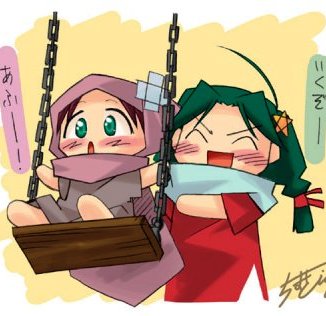 Completely accurate depiction of Afghan-Pakistani relations.
"There are no true friends among nations."
Despite that sad truth of the world, we sincerely hope that they can continue building their friendship.
Advertisement:

Written by Timaking. Our heroine of this webcomic is the nation of Afghanistan, or Afganisu-tan as she is referred to by others, a put-upon young nation who just can't catch a break. Whether she's being bullied by her enemies, bullied by her friends, or bullied by cats, life is just one long uphill struggle. Much like the history of the real Afghanistan. Other characters include most of Afghanistan's neighbors, such as the pranking Pakisu-tan, and others like as the cocky Merikan.

The story is told in 4-koma fashion with each strip devoted to a period in Afganisu-tan's history beginning with her independence from the UK in 1919 all the way to the U.S. led invasion, Operation Enduring Freedom, which overthrew the Taliban in 2001 and the subsequent elections in '04. The strips depict each period with Afganisu-tan and other nations interacting in various situations that reflect the real world. Only cuter and probably funnier than such events should be. Each comic is paired with an "Afghan Memo" which gives a brief summary of the real world events the comic displays.

Had a short-lived sequel, Pakis-tan, that unfortunately got cancelled after the creator's computer got infected with a virus.