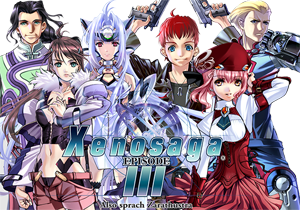 From left to right: Jin, Shion, KOS-MOS, Jr, MOMO and Ziggy
Ye Shall Be As Gods.
Advertisement:

In the distant future, mankind has colonized space, but planet Earth (referred to in-game as Lost Jerusalem) has disappeared from the map. The protagonist, Shion, is the head of the first R&D division of Vector Industries, and her team is developing an android superweapon called KOS-MOS.

Disaster strikes when the Gnosis, intangible (but deadly) beings from another dimension attack the ship. The rest of the story involves the Gnosis, the search for their source and the events that passed fourteen years prior on the planet Miltia — which has close ties to Shion's past.

Xenosaga is a series of Eastern RPGs created by Japanese developer Monolith Soft, a studio composed by ex-members of Square Enix who worked in many of the company's greatest hits of the 1990s, most notably Xenogears. To be precise, the original creators of Xenogears, the married couple Tetsuya Takahashi and Kaori Tanaka (known under her pen name, Soraya Saga), wanted to turn Xenogears into a big franchise, telling a story divided in multiple episodes, Star Wars style. However, Square Enix wasn't interested in the idea, so they, along with some of their team mates, and after partnering with Bandai Namco Entertainment (or rather just Namco, before they merged), decided to create their own studio to tell a whole new story using their ideas for Xenogears as a starting point.

All main entries have subtitles that reference books written by Friedrich Nietzsche, a philosopher from which the series as a whole takes many of its central themes from:

The franchise also managed to create a few side games:

Unlike the main trilogy, the other games have not been released outside of Japan. As a matter of fact, Europe only received Episode 2 out of the entire franchise, meaning that it only reached a very niche audience.

There's also a 2005 anime adaptation of Episode I titled Xenosaga: The Animation.

Known for throwing around heavy amounts of religious symbolism, literary references, and Techno Babble, as well as an enormous Jigsaw Puzzle Plot that demands the player's full attention just to know what's going on. And even then, due to the large amount of long-term mysteries, many scenes won't make complete sense until much later in the game, if not until the end of the trilogy itself.

The series was supposed to expand no less than 6 main episodes, but due to the series' Troubled Production and declining sales, the story had to be reduced to just 3 games that tells just a mere fraction of the story that was originally planned. Albeit they managed to keep the trilogy more or less self-contained and end on a positive note.

Xenosaga also has its own successor in the Xenoblade Chronicles series, which was created after Monolith Soft ended its partnership with Bandai Namco and became a first party Nintendo studio.

A few of the characters, (mainly KOS-MOS), have made appearances in other games, including Endless Frontier, Namco × Capcom, Project × Zone, and SoulCalibur III. KOS-MOS, as well as T-elos in a later update, even appear as Blades in Xenoblade Chronicles 2.