The world's greatest Occult Detective and opponent of the Cthulhu Cycle Deities. He is the protagonist for the short stories and the first two books in the series.

The son of Étienne-Laurent de Marigny, the New Orleans mystic and The Watson to Titus Crow until he Took a Level in Badass to become the series main protagonist.

A Texan psychic who works for the Wilmarth Foundation. He is eventually stranded on the planet Borea where he decides to become leader of the local La Résistance. 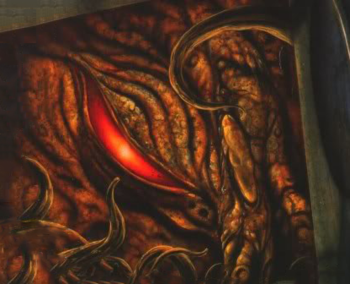 The ruler of the Elder Gods and their wisest, most powerful member. He is literally Cthulhu's brother and as benevolent as the R'lyehian overlord is evil.

Leader of the Chthonians: race of worm-like monsters with a squid-like head. Shudde M'ell appears like a larger form of a Chthonian, and possibly the progenitor of the species.