Web Video / Doctor Who: The Movie 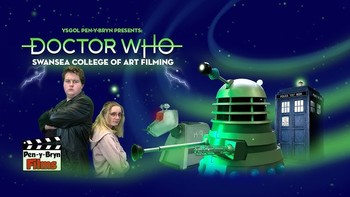 "I would tell you a story… a story about Time."
Doctor Who: The Movie is a Doctor Who movie created as an educational project by the Welsh school of Pen-y-Bryn in 2019. Thanks to the help of the charity Bobarth Wales, the film boasts impressive production value and, most notably, the presence of Sylvester McCoy himself on the cast, with his Seventh Doctor serving as as the omnipresent narrator.
Advertisement:

The films stars a new incarnation of the Doctor played by Ieuan Morgans, the placement of whom in the Doctor's timeline is resoundingly ignored, although the Seventh Doctor speaks about him in the past tense. At any rate, he and his companion Lucy (no relation) find themselves running after the Master and his unwilling apprentice Jodie (no relation either) across Time and Space as the Master zips about from timezone to timezone, wreaking havoc and collecting mechanical parts to repair his failing body. As such, The Chase is the clearest influence on the film, but most every setting the characters visit is itself a homage to a Doctor Who episode past, like a visit to the Library in the 51st century or a tearful goodbye to a companion on a beach. You can watch it here

No relation to the canon TV movie starring Paul McGann.

Doctor Who: The Movie provides examples of: