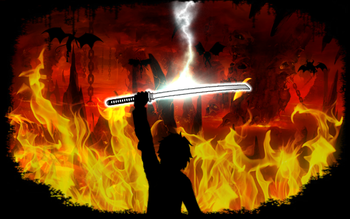 ROCK ON!
*RING RING, RING RING*
"Hello, God? It's me, Jung Hae-Lin. Just wanted to give you a status update. I haven't been having a whole lot of issues so far, but these guys are definitely stubborn. I don't think I've met a lot more than scouts and troopers, but they're bad business all the same. Yeah. I've still got a ways to go. Uh-huh. I'll keep you updated. Promise. Bye, God."
Advertisement:

Demonsteele is a massive gameplay overhaul for Doom by TerminusEst13, more known as the creator of single/multiplayer clash of the oldschool FPS heroes that's called Samsara.

Jung Hae-Lin was a former Korean soldier who just wanted to live the rest of her life in rural bliss. Said rural bliss is interrupted when Hell invades and she find her crops all stomped on by a fight between an Archangel of God and a particularly nasty demon. The Archangel is mortally wounded and passes away, but not before Hae-Lin continues his fight, killing the demon and then accepting his request to take up his mission - as an Angel of Death, rip and tear.

Apart from a plethora of heaven-blessed guns, Hae Lin is armed with, probably, her most signature weapon - Kharon. This sword is capable of sucking in the defeated foes' souls, improving you in two ways:

Advertisement:
Kharon is the really the weapon you're going to use most of the time, making most of the encounters in this mod close and personal. Guns, on the other hand, not only have (relatively) limited ammunition, but also barely participate in growing your combos. Nevertheless, they're useful in cases when you just can't let yourself close to the enemies for whatever reason. Or when you need to finish off these damn bosses.

...or, in a nutshell, take Shadow Warrior, mix it with Devil May Cry, and turn it up to eleven.

While the overall aesthetics haven't changed much from the original game (remember, this is a gameplay mod we're talking about, not a mappack), what was changed noticeably borrows a lot of looks from anime and heavy metal, both put into the blender.

At the time of this writing, Terminus has started implementing a second player character, Sun Shihong, a cyborg girl originating from China whose main focus is more on gunplay and punching people in the face, rather than slashing them, with a stance system to alternately power up her melee strikes or her guns. She can tase people, too.

Like Terminus's other works, Samsara and Push, Demonsteele was remarkable enough to receive a 2014 Cacoward for the Best Gameplay Mod. Its latest version can be downloaded from here

. And make sure you wipe blood off your blade after you're done playing.

See also High Noon Drifter, a more recent gameplay mod from Terminus that plays similarly to playing as Shihong in Demonsteele, but with a Western theme as opposed to Demonsteele's anime and heavy metal focus.

You have a whole page of tropes. Pray for a long read.

And then there were none.