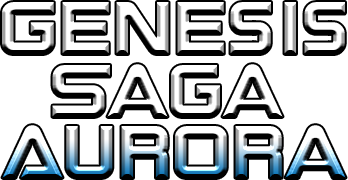 Just when you thought you killed enough demons!
Advertisement:

is a full-blown, major modification for the Doom game, supported by the popular source ports ZDoom and GZDoom. It's a joint project between Ryan Cordell and Hellser, with the former providing the base, grunt work behind the mod, with regards to ideas, design decisions, coding, while the latter refines and adds onto the concept.

The modification is still a big work in progress, a project that has been going on for many years, having been under at least three different names before settling with Genesis Saga Aurora. Formerly, Hellser was busy with his own mod, but fell into a stump as far as ideas went, that's when GS project author Ryan decided to invite him to co-author the project.

Genesis Saga Aurora (commonly abbreviated to GSA) features a different, slightly more challenging gameplay than that of vanilla Doom. It features a larger variety of demons ready to tear the player apart, with a select few demons having so-called "Elite" monsters — rare, much stronger versions of their common, lowly bretheren. To combat the increased demonic threat however, two more marines have joined the fray, along with a massive arsenal of over 21 weapons, with 3 differing weapons for all nine slots.

This mod is under nigh-constant updating, and as such can be highly unstable, the mod authors do work quick to provide fixes and additions to the gameplay.

However, the project leader has been known to implement features that are otherwise not available in either of the mentioned source ports, resorting to forking off GZDoom to make his own called Tower of Babel