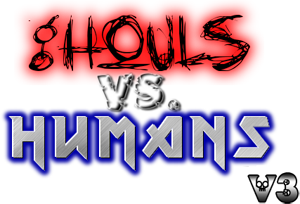 A Doom team deathmatch multiplayer Game Mod which pits the players in two opposing teams, the ghouls and the humans.

The ghouls, which previously appeared in the "Ghouls' Forest" Doom levels before making it to the multiplayer game, are mostly huge floating scary heads which kill people (Choke, Sjas, Creeper, Jitterskull, Frostbite). The humans are specialists armed with weapons of various kinds, depending on their class (Marine, Hunter, Cyborg, Ghostbuster, Engineer). Basically, one team is the Nightmare Fuel and the other team are the unfortunate recipients.

Ghouls vs. Humans: Legacy of Darkness is a fan-made, expanded version which adds a lot of new classes for both teams, and you're more likely to find it played online these days.

Ghouls vs. Humans provides examples of: