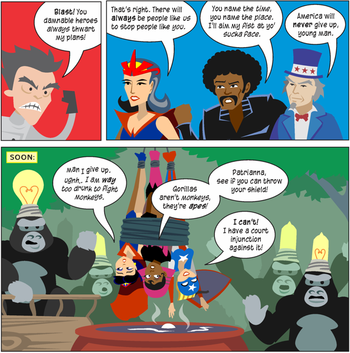 Not every legacy becomes legendary.
"You are my sister and technically have a claim to the throne. And believe me, I would love for someone else to rule. But it can’t be you. You’re just … the worst."
— Thor to Hela, Thor: Ragnarok
Advertisement:

Somebody is introduced who is set up to be the hero's successor, because the hero is overworked, due for a promotion or retirement, or being reassigned (something the hero naturally disagrees with). The newcomer seems to be superior to the hero in every way and everybody loves them, leaving the hero to think that maybe it would be better if they stepped back and left things to the new generation.

But of course, the replacement will turn out to have Feet of Clay or be a Deceptive Disciple (this can turn into Older Hero vs. Younger Villain), or the villain's Xanatos Gambit-of-the-episode happens to work perfectly with them (when the previous hero was able to prevent triggering them so far), and so the hero has to show what makes them so special and irreplaceable. In the end, Status Quo Is God, as the successor refuses or is unable to take the hero's place.

Also very common with robotic or cybernetic heroes, who will be replaced by newer versions. If that's the case, expect a Upgrade vs. Prototype Fight. These invariably are technically superior to the hero, but they lack Heart. Will the executives never learn?

A specific version of Always Someone Better. See also We Want Our Jerk Back!, Job-Stealing Robot & Rotten Robotic Replacement, Inadequate Inheritor and The Wrongful Heir to the Throne. Contrast Beta Test Baddie. For a fan reaction example, there's Replacement Scrappy.