Recap / Asterix and the Secret Weapon 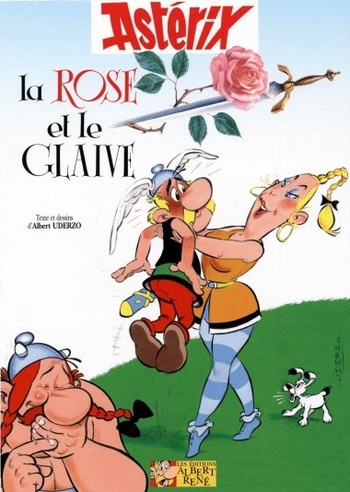 The women of the village decide that their bard, Cacofonix, is not a suitable teacher for their children and invite a new bard to replace him. That bard turns out to be Bravura, a pants-wearing, drum-playing, outspoken female bard from Lutetia, who has very clear ideas of the current state of women in the village. Specifically, she wants to empower the women in the village and does not truck with the old-fashioned "gallantry" of the male villagers. She enrolls the women of the village in afternoon courses on feminism and soon the village is in uproar over this new development, with women making their own pants, speaking up to their husbands (who were mostly already shown as henpecked or at least very gallant before) and finally casting out Vitalstatistix and electing his wife Impedimenta as the new chief.

When Asterix speaks out against the chaos, Bravura proposes We Can Rule Together to him and attempts to kiss him. Shocked, he hits her out of reflex. Though he immediately regrets this and apologizes, he also is cast out of the village. Several others join him, partly out of camaraderie and partly because life has become unbearable in the village.

Meanwhile, Julius Caesar is hatching a new plan to get rid of the pesky Gaul village once and for all. His new secret weapon is being shipped in right now: Female legionaries, to take advantage of the fact that everyone knows Gauls Would Not Hit a Girl.

When Asterix tries to warn the remaining villagers of this new threat, he is laughed off. Bravura goes out to the landing army, greeting the legionaries as sisters. This is not received well. However Asterix, impressed by Bravura's prowess in fighting, proposes a truce and the two start hatching a plan.

When the Roman army arrives a while later to attack the seemingly undefended village, they are instead welcomed in with open arms: The Gaulic women have set up the village as a mall with the newest fashions from Lutetia, accessories and shopping possibilities. Forgetting what they came here for, the female legionaries set out to shop, while in the background the men destroy the fortified camps once again. In the end, they reinstate Cacofonix as a bard, chasing the legionaries out of the village with his singing. Asterix and Bravura bury the hatchet, and Caesar is the laughing stock of Rome when the story comes out.