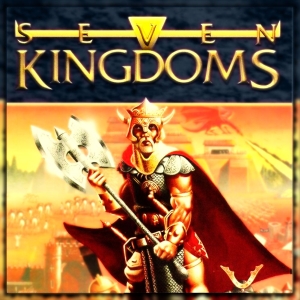 Seven Kingdoms is a Real-Time Strategy game, published in 1997 by Enlight. This game puts you into the role of a king of one of originally seven civilizations: Chinese, Japanese, Greek, Norman, Vikings, Mayans or Persians. You build your army, mine and manufacture goods, secure trade routes, expand your kingdom, research technologies... and send spies to your rivals to get information on your enemies or other benefits. There are also monsters named Fryhtans which roam through the lands, who can be attacked to gain money. And sometimes, it gives out the Scroll of Power, which you can use to call forth your civilization's God/Greater Being.

Later on, a patch added another three civilizations, the Egyptians, Mughuls and Zulus, which was later bundled with the game as Seven Kingdoms: Ancient Adversaries.

There's also a 1999 sequel named Seven Kingdoms 2: Fryhtan Wars. Gone are the Mayans, Mughuls and Zulus... and the naval option that was available in the first game. Enter new Civilizations in the Celts, Romans, Carthaginians, Indians and Mongols, as well as civilization-specific units (such as Shaolin Monks for Chinese, Ninja for Japanese, etc) and more close-to-myth Greater Beings (such as Amaterasu for the Japanese instead of the generic 'Mind Turner'). The biggest feature, however, is the ability to play as the Fryhtans themselves, giving a new gaming experience.

The last part of the series, called Seven Kingdoms: Conquest, came out in 2008. It vastly simplified both the distinct features of the series such as spying and diplomacy, essentially removing the ability to win diplomatically, for instance. Moreover, the regular RTS gameplay was primitive as well, and so the game tanked

, ending the series. However, the first and second game can still be played via Steam and GOG.com. An HD edition of Fryhtan Wars was later released in 2015.

Not to be confused with the band, the visual novel, The Twelve Kingdoms, The 10th Kingdom, or The Three Kingdoms.