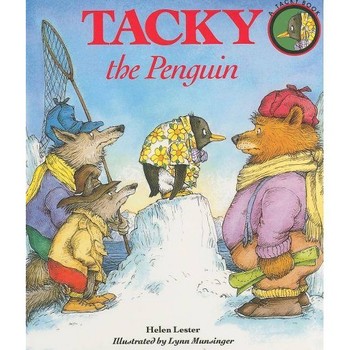 Tacky the Penguin is the opening book to a series about a group of sedate, proper penguins — with one very different member. Goodly, Lovely, Angel, Neatly, and Perfect live happily and quietly in a nice icy place, their peace and propriety mostly disturbed by the appropriately named Tacky, the odd bird out. However, time after time, Tacky's oddity proves to be a help to or even the salvation of him and his companions.

The Tacky the Penguin books are written by Helen Lester and illustrated by Lynn Munsinger.

These books include examples of the following tropes: