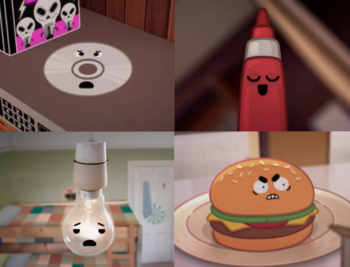 And this is only some of the stuff that can talk in this world.
"Everything talks. I don't just mean the animals, I mean everything. The sun, the moon, the clock—even the water! The water fucking talks! It's like Pee-Wee's... EARTH."
— The Nostalgia Critic on The Wind in the Willows
Advertisement:

On TV anything can be made to seem to talk. This is especially common in commercials, where everything from products, to signs, food, body parts, clothes and beyond has something to say. They all want you to buy something too, even your ratty old sneakers have sold out and are working for the man.

One might think that consumers would want their foodstuffs and household products not to be possessed by demons (in fact, a Sprite commercial features a family running in terror from the smiling anthropomorphic sun that bursts forth from a bottle of a Sunny Delight counterpart), but apparently advertisers don't see it that way. At its worst, it can become quite disturbing. Often combined with Animate Inanimate Object.

Some specific subtypes of this are: