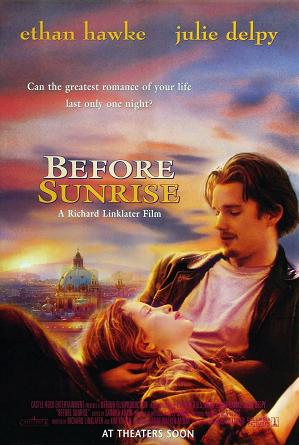 Jesse: So listen, so here's the deal. This is what we should do. You should get off the train with me here in Vienna, and come check out the capital.
Celine: What?
Jesse: Come on. It'll be fun. Come on.
Celine: What would we do?
Jesse: Umm, I don't know.
Advertisement:

Before Sunrise is a romantic drama from 1995, and one of the early works of director Richard Linklater. It's notable for being a romance film that contains next to no Love Tropes (or at least, very few straight examples of Love Tropes), letting the romance develop through philosophical and increasingly intimate conversation. It stars Ethan Hawke as Jesse, an American tourist travelling to Vienna to catch his flight home, and Julie Delpy as Celine, a French university student on her way home to Paris. They meet briefly on the train and are just making a connection when the train arrives in Vienna and Jesse has to disembark. Not wanting to leave one another's company just yet, they decide to spend the day and night together, knowing that in the morning Jesse has to catch his flight and Celine has to get back on the train. They spend their time together exploring Vienna and talking about life, the universe and the dichotomy between relationships, love and sex, and all with the thought hanging over them of what will happen when morning comes.

It was followed in 2004 by a sequel, Before Sunset, that reunited the director and stars and saw Hawke and Delpy co-write the screenplay with Linklater. Nine years have passed since the first film, and Jesse has immortalized the experience in a best-selling novel. While in Paris on the final leg of his book tour, he's reunited with Celine after she reads the book and comes to see his appearance at the Shakespeare & Company bookstore. They quickly reconnect, and even though Jesse only has a couple of hours before he needs to catch a flight home, they decide to kill time by wandering around Paris. Much like the previous meeting, their conversations are very philosophical and introspective, and they also take the opportunity to catch up on the last nine years of one another's lives and how they remember and feel about the events of the first film.

A third film, Before Midnight, was released in 2013. Linklater directed a screenplay written by himself, Hawke and Delpy. The film is set in Greece, nine years after the events of Before Sunset. Jesse and Celine are coming to the end of their summer stay in the villa of fellow author Patrick. Accompanying them are their twin daughters as well as Jesse's son Hank, whom Jesse walks to his stateside flight at the beginning of the movie. The movie follows the two as they converse with each other as well as with friends, trading stories and observations about life and love, and remembering events from the first films as well as from their lives since then.

All three films contain examples of the following:

Before Sunrise contains examples of the following tropes:

Before Sunset contains examples of the following tropes:

Celine: (imitating Nina Simone) Baby, you are going to miss that plane.
Jesse: ... I know.

Before Midnight contains examples of the following tropes:

Alternative Title(s): Before Sunset, Before Midnight