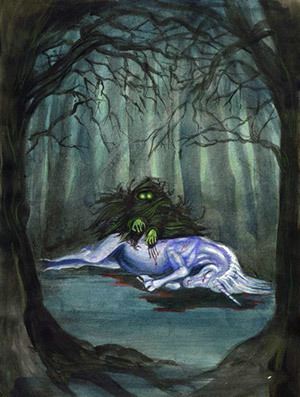 Unicorns are mythical animals which often represent things such as grace, purity and light in works of fiction. Given this, anybody killing or otherwise harming a unicorn can be taken to be an utterly repugnant character. This can often mean that they have crossed the Moral Event Horizon, but it doesn't have to. Often, the act of killing the unicorn will cause some curse to be placed upon the perpetrator.

This is a common trope in works that feature unicorns, due to the fact that the symbolic significance of unicorns is widely understood, making it useful in establishing or reinforcing villainy in a character.

Unicorns' purity may be reflected in a high resistance, if not outright immunity, to all or evil magic, as well as the ability to undo magic and/or being strong against evil or undead opponents. Evil or corrupted unicorns may also exist, but will generally be noted to be explicitly tainted, desecrated or otherwise "wrong" in some manner even where other evil creatures aren't.

Not to be confused with Dead Unicorn Trope.

See also: Moral Event Horizon, Unicorn, Nature Adores a Virgin (for when virgins are believed to be sacred, and the two are heavily associated with each other). Often leads to the Broken Angel trope. A similar role is sometimes filled by The Marvelous Deer. Contrast Hellish Horse.