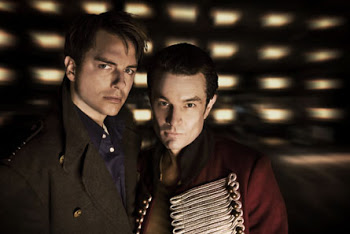 Cue the "Spike x Jack" fanfics.
Jack: [about John] Three rules. One, don't believe anything he says. Two, always keep him in front of you. And three, under no circumstances let him kiss you.
Gwen: As if I would!
John: Has he got to the "no kissing" rule yet? He only invented that one because he wants me all to himself.
— Jack introduces Gwen to "Captain John Hart"
Advertisement:

Jack's been gone for a while to spend some time with the Doctor, and Torchwood has got quite a bit more effective as a result. For one, they've redecorated the base, Gwen has taken charge of missions and Ianto gets to ride in the car now.

The Torchwood team are chasing a blowfish-headed alien driving a sports car. Said blowfish proceeds to break into a house and take hostages. After sizing up the team and daring them to attack first, he is unexpectedly shot by Jack, fresh from his trip with the Doctor.

Once they return to the Hub, the team demands to know where Jack disappeared to. He mentions that he's "found his Doctor" but that he came back to be with the team. Gwen is now engaged to Rhys. She fumbles awkwardly around Jack for a bit when she tells him, and he promptly stops flirting with her.

Meanwhile, a guy who calls himself "Captain John Hart" arrives from the future. He loves standing on top of buildings just as much as Jack does. Unlike Jack, however, he also likes throwing people off of them. Also, he's a Time Agent and dated Jack for five years.

John makes a dramatic entrance and calls Jack. They make out, punch each other and reminisce about the past. Turns out they were partners (in every sense) before both left the Time Agency. John needs Torchwood to help him gather a series of Plot Coupon canisters. While searching for the things, Jack asks Ianto out on a date — dinner and a movie. Ianto happily agrees.

Torchwood finds the canisters, but John knocks out Gwen by kissing her with poisoned lipstick, takes out Owen by shooting him, headbutts Tosh and throws Jack off of a building.

With Jack sprawled over a bench with a very painful-looking broken back, John tries to use his new gadgets for his own gain. However, all of Torchwood make it back to the Hub in time to point their guns at him. Also, the previous owner of the canisters has set up a trap, and a bomb latches onto John's DNA. Ianto merrily times the bomb with his trusty stopwatch.

John handcuffs himself to Gwen and threatens to blow her up along with him. Gwen decides to drag him into the rift in order to save the city. However, the team manages to inject John with their own DNA just in time, confusing the bomb and resetting time to the start of the day.

John asks to join Torchwood, but Jack just bids him farewell with a sweet kiss. John has one final message: "I found Gray."