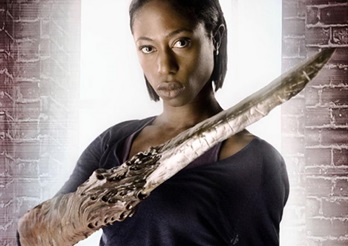 That's one gnarly lookin' arm growth ya got there... might wanna get that thing checked out.
Gwen: Do you feel human?
Beth: Yes.
Gwen: Yes, well, then you are. What makes us human? Is it our minds or our bodies?
— Gwen helps Beth adjust to the discovery of her alien origins
Advertisement:

A woman called Beth wakes up to a burglary, blacks out and wakes up to find one of the thieves dead and the other seriously injured. She's taken in by Torchwood, who cautiously probe her until the alien inside her shows itself, removing a form of biological invincibility built into her body to do so. Beth's arm suddenly mutates into an organic interface, and she begins spouting an alien language, giving no information that would compromise the Sleepers' mission, who are from Cell 114.

There are a lot more aliens like Beth around who fully believe they're human. They'll be activated soon. Unfortunately, Beth's early awakening seems to stir them to action, whereupon several innocent people are sent to their deaths as former loved ones suddenly gore up people in positions of power, babysitters let babies roll into oncoming traffic, and paramedics carry out suicide attacks. Three Sleepers activate- two blow themselves up, hitting targets that cut off communications in Cardiff. The last Sleeper prepares to cause an even bigger boom by breaking into an old nuclear store, where he will begin launching and exploding the warheads. Owen pesters Tosh to contact Jack, but she can't get it through his noggin that the entire telephone network is down until Ianto ridicules him with every form of communication being cut off- even the tin cans with strings.

The end of the world is nigh, and it seems humanity has only a few moments left to live. Owen suggests they all have sex. "And I thought the end of the world couldn't get any worse", Ianto retorts. The aliens are thwarted in the end. The rogue Sleeper has his immunity to bullets removed like Beth's, and gets shot down. A lot more talkative and sadistic, the Sleeper eagerly blows himself up to keep Cell 114's activities from being compromised.

Tragically, Beth does not like the idea her sleeper agent programming will soon kick in and erase her humanity. She knows that putting her in cold storage will also fail, since her body was engineered to thwart such things. Instead, Beth forces Torchwood to pull a Suicide by Cop and lunges at Gwen with her Sleeper body's arm blade extended. Vulnerable to bullets with her defenses disabled from their experiments, Torchwood shoots Beth, breaking off her blade, and she perishes with her humanity intact. Gwen laments Beth's death, but Jack realizes she knew Torchwood would have ended up killing her soon enough and wanted to make it easier on them.

Stashing away Beth's broken blade, Jack wonders where the rest of Cell 114's Sleepers might be, as Gwen prepares to tie the knot with Rhys. For the meantime, Torchwood must keep on doing its job, ready if the Sleepers resurface.