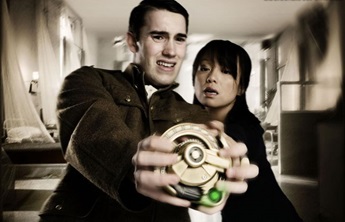 A soldier and his sweetheart, brought together by a Timey-Wimey Ball.
Tommy: (Refering to The War on Terror) Seems like there's always a war somewhere.
Tosh: That's not exactly a war.
Tommy: Looks like one. First year they woke me up... 1919... they told me it was all over. We won. “The war to end all wars,” they said. And then three weeks later, you had the Second World War. After all that... Do you never wonder if we're worth saving? The human race?
Advertisement:
Tosh: Yes. I think we're worth saving. Wars and all.
— Tosh assures Tommy Brockless humanity is still worth having around

Tommy, a shell-shocked soldier from World War I, is the only hope for repairing a rift in time. So Torchwood freeze him for 90 years, waking him up once a year to check his vitals. Tosh has developed a bit of a crush on him in the four days she's known him.

This year, during his annual walk about town, Tommy finds out that he has to go back to 1918 the next day. Unfortunately, when he returns to the past, it will act like a Reset Button on his end. Tommy only remembered everything until now because he's been yoinked from his proper timestream. Once he makes the return trip, it will cause Tommy to revert to the man he was before encountering Torchwood- a soldier terrified of going back to the war effort back during an era where abandoning your duty was the same as treason to the crown, which meant capital punishment. Jack allows him to go home with Tosh so they can enjoy one night together. In a rare moment of sincerity, Owen tells Tosh to be careful, because he knows how much it hurts when people head home to their own time again.

Ianto and Jack have been dating for a while now, and they share a sweet kiss when Jack says he doesn't want to go back to the 51st century any more.

After some bonding time, Tosh finds it hard to let go of Tommy. Likewise, Tommy is against leaving Tosh behind and returning to certain death. However, when time itself starts to fully unravel and echoes of the past and present overlap, Tommy has no choice but to return to his own time to correct the ensuing paradox. Tosh lies for Tommy's sake and makes him believe everything will be okay once he crosses from the current century to the last one, where a pair of former Torchwood operatives await. Tommy is finally brought back to 1918 to repair the time gap. Sadly, he also immediately becomes shell-shocked again. Tosh gets through to him and convinces him to use his time repair device, even though she knows this will be the last time she can interact with him, Tommy's relations with Torchwood will be at an end, he'll resume life as a soldier ever so briefly because the bastard higher-ups are living in a time where they have yet to discover there's such a thing as legal insanity, chalk it up as Tommy being yellow-bellied, and he'll be shot for "cowardice" a few weeks later.

Tosh regrets the loss of Tommy, but comes to accept it as a Heroic Sacrifice, even if history didn't see it that way. Tommy will be remembered and secretly vindicated through the presence of Torchwood.