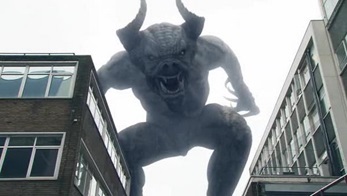 "From out of the darkness, he is come."
"All hail Abaddon, the Great Devourer. Come to feast on life. The whole world shall die beneath his shadow. I look upon you, my god, and know my work is done."
— Bilis Manger praises the Son of the Beast, Abaddon
Advertisement:

Well, looks like last episode's rift opening did actually have some lingering effects. People and things from different time periods are popping up all over the world, causing the usual complications: Roman soldiers in the lock-up, bubonic plague spreading and virulent.

The gang, minus Jack, all start hallucinating. Tosh's dead mother warns her that something's coming out of the darkness. Gwen sees a vision of Bilis from last episode apologising. Ianto's dead girlfriend tells him to open the rift. Owen sees Diane, and gets angry with Jack and storms out.

Jack and Gwen find Bilis and he explains he can walk through time as easily as one walks across a room. He escapes before Jack can bring him in, but catches Gwen alone so he can show her a vision of Rhys dead. Gwen brings Rhys to the Hub to keep him safe, but apparently this is just what Bilis needed to get in and stab him dead.

Owen returns and announces he's going to open the rift, and everyone but Jack is going right along with the plan. Owen kills Jack, not knowing that it's only temporary. Everyone but Gwen is appropriately shocked by this. Gwen gets everyone's retinal scans to open the rift, Jack wakes up (scaring the hell out of his employees) and they head outside to inspect their handiwork. They find Bilis rejoicing over the release of Abaddon, the Great Devourer. As it stalks Cardiff, people die beneath its shadow. The only solution? Send the one man who can't die. Jack's overwhelming life energy destroys Abaddon, and leaves Jack dead... for a few days. He comes back to life just as Gwen's kissing him goodbye. He gets a big hug from Tosh, kisses Ianto and lets Owen sob in his arms for a bit.

Everyone's back to relative normal (Rhys is alive again) and at least on speaking terms. As Gwen muses upon Jack's resistance to opening the rift, she asks what could tempt him to do it. Jack's only response is "the right kind of doctor". Suddenly, Jack's odd hand-in-a-jar starts beeping and a familiar whooshing sound is heard. Next thing anyone knows, Jack has vanished, to parts unknown.