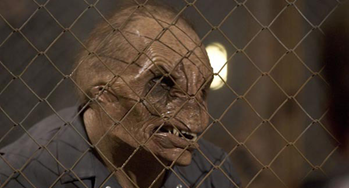 "Whatcha gonna do when the power of Weevilmania runs wild on you!?"
Jack: You ask me, these guys are using Weevils to carry out the perfect murder. No fingerprints, no traces of recognizable DNA, ... a quick, guaranteed death. Nothing to connect anyone to the murder.
Owen: Right. Should be a piece of piss to find the killer, then.
—Torchwood Three has nowhere to begin with Weevil attacks afoot
Later on...
Advertisement:
Owen: This is Owen's voicemail, don't leave a message.
Jack: Nice try, Owen, I want you back at the hub immediately. We've got a Weevil murder, so get your bony little ass over here now.
— Jack tells Owen to shove it after his brooding loner jackassery overstays its welcome

Weevils have come back to the fore. While Gwen and Rhys are having relationship issues during a dinner out, Jack chases down a Weevil in the back alleys of Cardiff. The two scenes collide and Gwen leaves with Jack to help him, leaving a very irate Rhys. The two chase after the Weevil, only to discover it being piled into a van by a group of men wearing all black.

Tracking the van to a warehouse in the docks, Jack and Tosh find a dead man with evidence of Weevil marks. Getting a call on the dead man's mobile, Jack receives vague threats to not pursue any further. Jack responds with threats of his own.

To track down the owner of the warehouse, Owen (fresh from his affair with Diane, breaking off the affair with Gwen, and generally being Owen) is sent undercover into the high-stakes world of property (posing as a jellied eel merchant). Jack and Ianto follow up a recent injury, and Gwen is sent home to try to piece back together her relationship with Rhys.

With the injury case not being the talkative sort, and the property sting not yet paying off, the crew decide to use their own Weevil as bait to attract these Weevil collectors. The gambit pays off.

Gwen's attempts to patch up her and Rhys aren't going so hot. While she does confess to her affair with Owen, she drugs him with Retcon so he won't remember in the morning. She then goes back to the comfort of the Hub with pizza for everyone, but finds herself alone.

Meanwhile, Owen is really getting to know his connection in the property business, Mark. They go out for a drink, get into a tussle, and go back to his place. While excusing himself to go find the bathroom, Owen gets into a locked room and finds a chained-up Weevil. Mark invites him to see what the whole thing is about.

Gwen's solitude in the Hub pays off when a text message comes in on the dead man's phone. The code given allows Jack and the others to track down a warehouse that Mark Lynch owns.

Turns out the whole story is that Mark and a large group of guys who, disillusioned with life and the meaning behind it, get together to face off against Weevils in cages, getting back to their roots of violence and fear. Everyone who goes in puts up money and the one who stays the longest gets it all. The dead man was simply one who went into the cage and didn't bother to fight back.

Mark threatens Owen into entering the cage. Owen scoffs at Mark's threat and tells him that he'll go into the cage without needing the threat. After Owen gets locked in, Jack and the others show up and pull Owen out before the Weevil can finish killing him. Mark can't accept the end of his fun and gets in the cage, letting the Weevil finish him off.

After Owen recovers, he calls Jack out on rushing him to help him when he had finally found peace in that cage. The episode ends with him in the lockup, staring down Weevils and snarling at them while they recoil in pain. After intimidating the whole lot, Owen declares himself "King of the Weevils"!